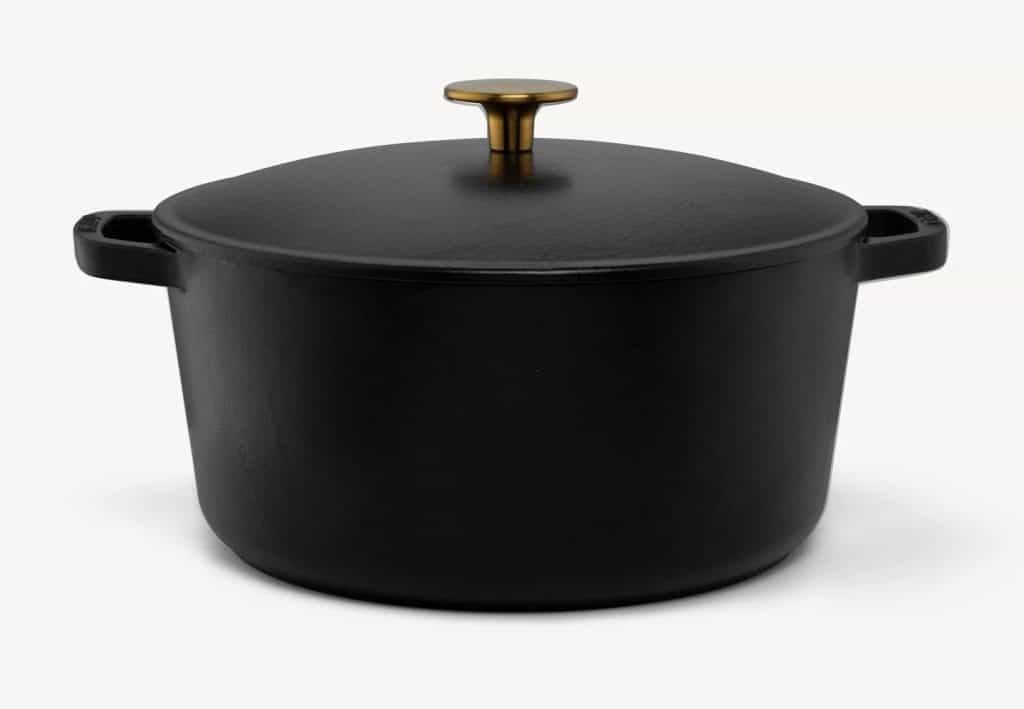 If you’ve been trying out different cooking methods lately, then chances are you’re familiar with the concept of the Dutch oven. The thick-walled round cooking pot provided with a tight-fitting lid on the top is finding itself in the kitchen of many homeowners.

Because of its cast-iron body, it conducts heat evenly and prevents sticking of food in the bottom. This makes it ideal for both indoor and outdoor use. Dutch ovens can also be used directly inside of an oven.

But there’s a niche product market inside of Dutch oven. It is known as French oven and is very similar to a Dutch oven except for one characteristic. That is, it comes pre-coated or pre-enameled whereas not all the Dutch ovens do. What this means in the most basic terms is that you won’t have to spend hours on creating a coating on the inside of the oven to prevent food from sticking.

The market is traditionally dominated by established brands like Le Creuset and Lodge. However, recently a startup named Milo emerged on the scene and has taken the cooking world by storm. This is because of its cutting-edge products priced one-third of what the established brands charge.

A thing to note here is that Milo doesn’t promote its products under the French Oven label. That is kind of still synonymous with Le Creuset, who was the first to introduce it. Milo’s Dutch ovens are still intended to go head-on with Le Creuset’s French ovens.

This Dutch oven from Milo utilize the same materials as its competitors, i.e., cast iron. It is hand finished and provided with two layers of enamel. This ensures both a smooth finish and durability. On top of that, it handles heat better than (or on par with) any other Dutch oven which is mainly because of the heavy build.

With a capacity of 5.5 quarts and measuring around 10.5 lbs, use this oven for preparing almost anything. Deep fry your chickens, prepare a mushroom soup, slow-cook braises, bake apple cake, or simply boil milk and water. It will never disappoint you.

The lids are tight-fitting and come without nubs. This reduces the cost of the oven and allows for basting naturally. The result is the ingredients get evenly cooked and meat perfectly braised.

The areas in which it lacks is probably the color choices you can make. Dutch ovens are known for their exotic colors ranging from cherry red to elegant white.

Some ovens from Le Creuset offer upwards of 10 colors. But Milo’s are limited to just two: white and black. But if creamy white is your favorite color or is something you can go along with easily, this might be a blessing in disguise. The white color will give you more control over cooking and sticking of your meat.

With a price tag of around $100, this is well cheaper than most premium-ranged Dutch ovens available in the market.

To appeal to even more people and reach a bigger audience, Milo introduced a smaller version of the big, bulky classic Dutch oven. This is two lbs less than the previous oven with all the same features. Concurrently, the capacity is reduced from 5.5 quarts to 3.5 quarts. But as a downside, the handles are on the smaller side. So some people might find it difficult to wrap their fingers around the handles, especially with oven mitts on.

This is a perfect fit for smaller families consisting of three to four members. A one-time of chicken soup can be prepared with ease. This is oven-safe too and transfer it directly from stovetop to oven and bake as high as 500 degrees.

If you’re camping outdoors, then this small Dutch ovens might be a better option than those offered by Le Creuset. This oven is highly portable and you can carry it along with ease. Being lighter in weight, you can move it around the firewood single-handedly with ease.

When cleaning, you’ll only need warm water and vinegar to clean this oven. As it is enameled, applying soap is not recommended and is not necessary. Only use them when you’ve prepared something with a strong fragrance. Priced reasonably, you get to choose from either black and white.

With the introduction of premium-range skillets, Milo has made it clear that it’s not just eyeing for the Dutch oven market and has plans for a much bigger market. The skillets are pre-seasoned and come with the enamel coating – something inspired from the world of Dutch ovens.

This skillet from Milo is ideal for those who are willing to shell out more for zero maintenance.

Skillets, over time, are prone to hotspots among other issues. This calls for maintenance from time to time. As these are pre-seasoned, the glassy shell will protect the iron metal from high-heat and rough use. Also, you’ll save yourself from the hassle of seasoning it after every use, which is not the ideal way of maintaining a utensil anyway.

Because of its similarity to Dutch ovens, it provides superior heat distribution and even cooking. The skillet has a diameter of almost 10 inches, which is big enough for frying or processing most food items. It also perfectly complements Milo’s range of Dutch ovens and can be used alongside it.

Priced in mid-range, this might not be the cheapest of the skillets available, but it’s definitely worth the cost because of the benefits it brings to the table.

Milo is courageous enough to offer a lifetime warranty on all of its products. They advertise it proudly on their homepage. This testifies the faith they have in their product quality and durability. So expect these ovens to last generations.

If not, you get free replacement anyways. The track record for the past few years is fairly spotless with its own CEO sitting down and replying personally to some customers.