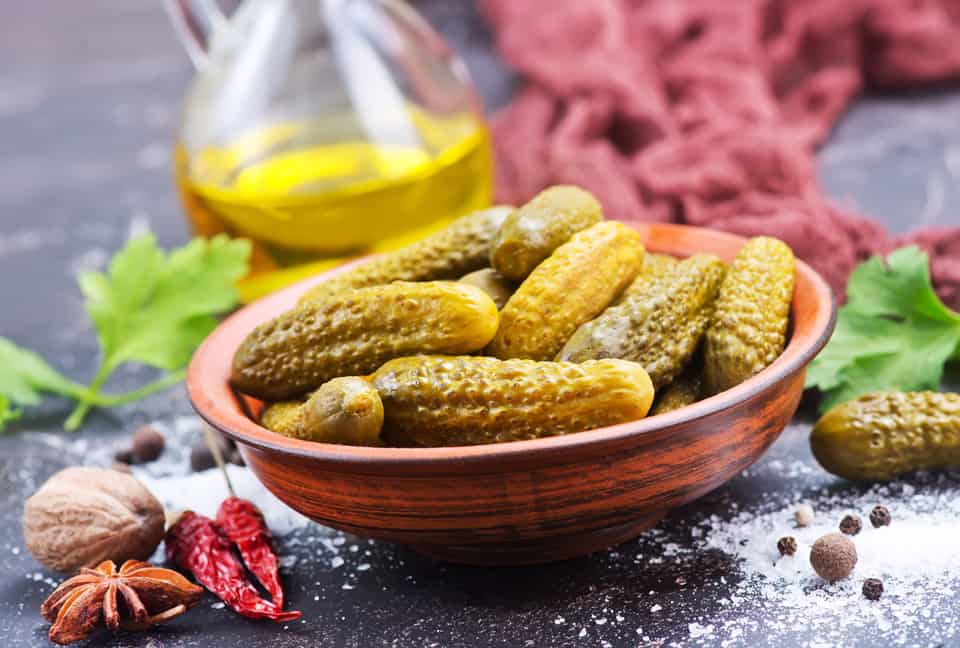 Any food that is preserved with salt, vinegar, or some other acidic solution forms a pickle.

Cucumber pickle is an easy and delicious way of preserving cucumbers and enjoying them all year round. On their own, cucumbers are often considered bland, but when infused with dill,  garlic, and other spices through pickling, their flavor comes alive and really shines.

In this guide, I will be showing you the simple steps to follow for making crunchy and delicious cucumber pickles at home. I have prepared for you a simple cucumber pickle recipe followed by some Korean and Japanese versions of pickled cucumbers.

But before we move on to the cucumber pickle recipe, let us consider the different varieties of cucumbers available for pickling:

There are many varieties of American cucumbers and the American pickling cucumber is the best one to pickle. There isn’t too much difference in the tastes of these different types; so you can use any variety that is available at your local farmer’s market for your pickling project.

American pickling cucumbers measure between 3-5 inches though you could also get smaller ones of about 1-3 inches. The smaller cukes are useful in making gherkin-type pickles. You can leave these whole whereas you need to slice and dice the larger ones for getting out their flavors.

If you are the DIY kind, you can even consider growing your own cucumbers as the seeds are easily available in seed catalogs.

Here are some of the popular American pickling cucumbers:

This variety comes from Kansas and has been around for over 80 years. It is about 4-inches in length and produces crunchy pickles.

These are round heirloom type cukes and they make really crunchy pickles.  They are lemon-shaped but only turn yellow once ripe.

This is an extremely popular, award-winning American pickling cucumber that is resistant to diseases and pests.

You can use any variety for your Japanese or Korean pickling recipes. Most of these are seedless and long; their flavors and textures vary greatly. The skins of Asian pickling cucumbers are generally thinner than their American counterparts. Korean cukes are often very bitter; so always have a taste before pickling them.

Gather all ingredients and tools

Once you have zeroed in on an easy cucumber pickle recipe like the one below, gather all of the ingredients and tools needed for the pickling project.

Cucumbers can get very dirty during transport. That is why you must buy organic, locally grown cucumbers available at your nearest farmer’s market. Even if you choose organic cucumbers, you still need to wash them. We certainly do not want any harmful bacteria in our pickles.

To wash your cucumbers, soak them in warm water mixed with vegetable washing solution. If you do not have the said solution, you may use white vinegar or apple cider vinegar. This will remove dirt, grime, and pollutants from the cucumber skins. Do not do this too far ahead in time; you must pickle the washed cucumbers right away otherwise it could lead to spoilage.

It is important to remove the blossom ends of the cucumbers as they could lead to spoilage too. Simply slice off the ends with a knife.

Depending on the variety and length of the cucumber, you may want to slice and dice them lengthwise. Smaller cucumbers or gherkins can be left as they are. The size of the slices is completely based on your personal preference. Just make sure to keep the slices are of uniform length so that they will fit in the pickling jar properly.

Clean and prepare the jars

Depending upon the type of pickling process used, your recipe may call for sterilizing the jars. If that is the case, you must boil the jars in water for about 10 minutes. In case you do not have to sterilize the jars, simply wash them with warm soapy water and leave them to air-dry. If the recipe only says ‘prepared jars’ or ‘clean jars’ then simply washing them in hot soapy water is enough.

Japanese and Korean pickling methods are impressively varied. Cucumber kimchi from Korea is delicious served with rice, noodles, or any other main course. Japanese nukamiso pickles are soured in rice bran while their miso pickles are made using fermented soybean paste.

Shoyu pickles are made with soy sauce. Chinese and Koreans also have soy sauce pickles but the rice-bran and miso pickles are entirely a Japanese creation. Japanese lightly pickled cucumbers, called Kyuri asa-zuke, are a perfect ending to a hot-and-spicy meal and often considered as ubiquitous as sushi and sashimi.

One thing these cuisines all have in common is the fact that pickling is done not just to increase the vegetable’s shelf-life, but also to increase its digestibility, flavor, and nutritional value.

Cucumber pickles are a great accompaniment to meat, sandwiches, subs, wraps, and many other main courses, and they have tons of benefits as well. I hope you will try the above easy cucumber pickle recipe and even add in your own variations!

How to Make Lacto-Fermented Pickles