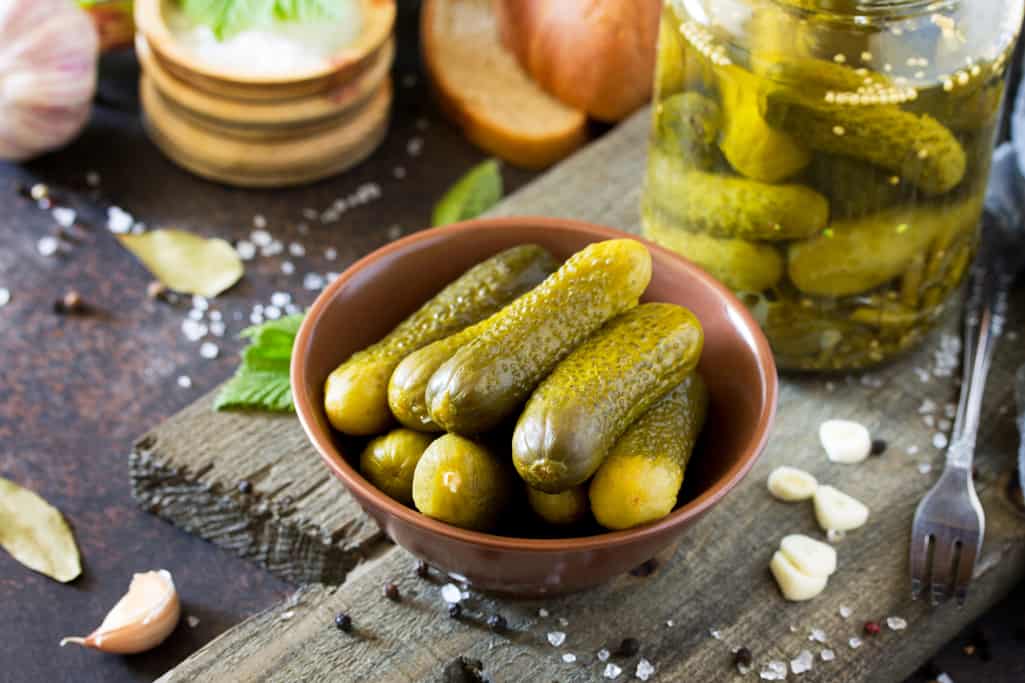 Pickling is a method of preserving food in vinegar or brine. It’s one of the oldest methods of food preservation. The word pickle originated from the Dutch pekel and the German pókel, which is salt or brine.

The history of pickling starts in Mesopotamia back in 2030 B.C. In 50 B.C. Cleopatra of Egypt’s exceptional beauty and good health was credited to the consumption of pickled foods. Legend says pickled foods made Roman soldiers strong and helped sailors fight scurvy during The Age of Exploration.

Nowadays, pickled foods are consumed around the world and made commercially or at home.. The easiness of making it at home has inspired many food enthusiasts to make this delicious, crunchy, flavorful and super healthy foods in their kitchen.

People often get confused when talking about two types of pickles – canned and fermented. The main difference is the way the food has been preserved. Canned foods are preserved with vinegar which gives food sour flavor. Vinegar is a preservative which stops natural fermentation from occurring and removes probiotic benefits of fermented foods.

Fermented pickles rely on the use of brine, the mixture of water and salt. The brine creates its own lactic acid which is a by-product of the fermentation process.  During the fermentation process, foods’ natural sugars are converted into lactic acid by the bacteria called lactobacilli. The lactic acid is what gives fermented foods their unique sour flavor and smell. The fermented pickles are super nutritious, great for building immunity and improving gut health.

These pickles are fermented in brine for a short period of time and retain its bright green color and crispness.

They are also known as gherkins. They are small – about an inch and a half in length and less than a quarter inch in diameter. In France and the US they are known as cornichons whereas in England as gherkins. The key ingredient is tarragon.

In comparison to a traditional dill pickle, Polish pickles contain more spices and garlic. They tend to be peppery and are often flavored with mustard seeds.

These pickles are made with sliced cucumbers, spices and a bit of sugar for a touch of sweetness.

Commonly made from finely chopped pickled cucumbers turned into relish. Pickled relish is often eaten with hotdogs and hamburgers.

How to make lacto-fermented pickles?

Making lacto-fermented pickles at home is fun. You get to experiment with different herb and spice combinations. If you are a newbie to pickling and fermentation it’s always good to start with a simple recipe first.

It’s important to choose the right cucumbers – look for small, light green and slightly under-ripe cucumbers. One tip is to trim off the ends of cucumbers so they stay crunchy after the fermentation.

For extra aroma and crispiness, I usually add grape leaves. If you don’t have them, don’t worry about it.

To make a brine, mix water and salt. My rule of thumb is one heaping tablespoon of salt per one quart of water however, it varies depending on which pickles you are making.  Ensure you use filtered water and Himalayan pink salt. Avoid using any type of processed salt as it will interfere with the fermentation process. To create a perfect brine for your pickled cucumbers, use brine calculator to calculate the exact amount of salt required based on the amount of water needed.

The fermentation process takes anywhere between 2 to 5 days. It depends on the weather – pickles will ferment faster in summer than in winter. When fermenting in summer, ensure to check the pickles daily. As soon as the desired taste is achieved, move them into the fridge. Lacto-fermented pickles can last 1-2 weeks in the fridge.

These homemade lacto-fermented pickles are delicious, crunchy and super easy to make. They are a much healthier option than store bought pickles as they come with rich probiotics.

Equipment: 1 quart glass jar, cheesecloth and a rubber band/lid and a kitchen knife