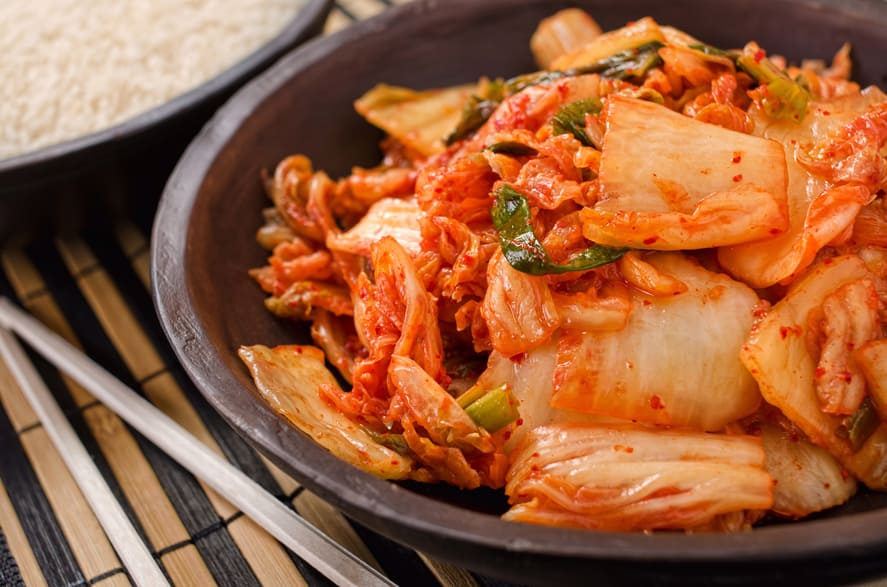 Lactic acid fermentation of fruits and vegetables has been around for centuries. Records indicate that foods like kimchi may have been eaten even in the third and fourth centuries.

Lactic acid fermentation of raw veggies results in savory pickles that make a delicious and spicy accompaniment to meals.

Lactic acid fermentation has been extensively researched and its benefits are well documented.

What happens during lactic acid fermentation?

The key benefit of fermenting foods like vegetables and fruits is that they can last for a year or more without spoilage.

Prior to fermentation, produce harbors a lot of bacteria including aerobic spoilage microflora species like yeast and bacteria. The cell populations of these microorganisms range from 10,0000 to 10,000000 CFU/grams where CFU stands for Colony Forming Units.

During fermentation, the organic acids diffuse into the brine and lower the pH of the solution. pH value of a solution is a measure of its acidity or alkalinity.

This low pH that results during fermentation influences microbial growth across the surface of vegetables. This, in turn, causes sugars from the vegetables to diffuse into the brine which fuels the growth of LAB.

The LAB or lactobacillus bacterium is more acid resistant than the spoilage microorganisms.

The resulting food is resistant to spoilage and has a sour, salty and sharp taste.

What does LAB contain?

Lactic acid fermentation is carried out by several different genera of bacteria.

Nearly 11 different genera comprise of what is collectively known as LAB. The lactobacilli are the most important genera as far as fermentation is concerned, since it can carry out respiration even without oxygen. Carbohydrates such as glucose, sucrose and fructose found in the vegetables are partially oxidized with the release of energy and their breakdown results in lactic acid formation.

The fermentation caused by lactobacillus bacterium does not need oxygen to be present. Because of this, lactic acid fermentation does not drastically alter the composition of food.

The entire basis of Lactic acid fermentation is formation of acid that inhibits growth of non desirable organisms.

Different LAB are tolerant of different temperatures and acid concentrations. They also produce different compounds that give pickles their characteristic tastes.

Here are the main groups of LAB and the compounds they produce:

Some fermented foods need a starter culture. Others such as fermentation or pickling of vegetables undergo self or spontaneous fermentation.

Several foods like yogurt and kombucha need a starter culture. This process is known as back slopping where a beverage or food that has undergone successful fermentation is reserved and used to inoculate a new batch.

This may be a crude method, but back slopping is highly effective. Several other factors also affect fermentation:

Let’s see now how this lactic acid fermentation process works in practice by using pickles, cucumbers, and kimchi as examples.

Preparation of Fruit and Vegetables

It is important that the salt concentration of the brine does not fall below 12% as fermentation will not be able to take place. You can add salt periodically to maintain strength of brine.

Store the pickles in clean, sterile jars and close the lid tightly. Keep it in a cool place.

Kimchi is one of the oldest fermented foods that might have been around for the past 2000 years. There are more than 150 different variations to the basic kimchi. The following recipe is rather simple and does not need any fish sauce, daikon radish or chili paste.