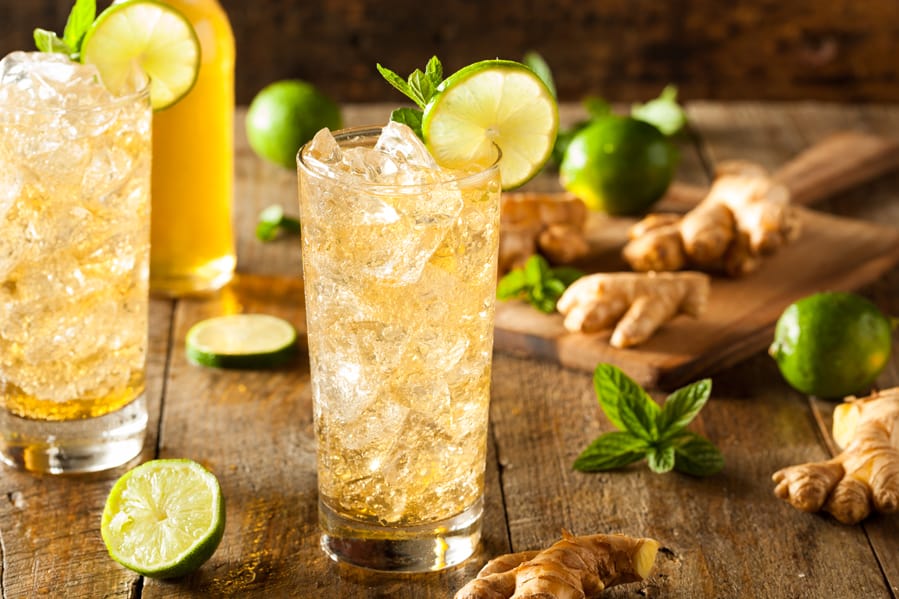 Ginger ale is a non-alcoholic and refreshing drink made of fresh ginger and carbonated sweetened water. It’s probably the easiest soda you can make at home with little effort.

It can be consumed directly to enhance your energy levels and feel fresh or used as a base to improve the flavors of spirit-based drinks.

A lot of people mix up Ginger Ale and Ginger Beer. They are two completely different drinks. Ginger beer is brewed and fermented drink, while ginger ale is a carbonated beverage flavored with ginger.

Ginger beer is an alcoholic beverage prepared from water, fermenting ginger, sugar, and a starter culture. Ginger beer has stronger flavors with a mild spicy touch when compared to ginger ale.

How to make Ginger Ale

To make ginger ale you will need either club soda or seltzer water.

Club soda is carbonated water that has been infused with minerals such as potassium sulfate, sodium chlorine, sodium bicarbonate and others. The minerals give water a slightly salty taste.

Seltzer originated in Germany and is also carbonated water but with no added minerals. It can be enhanced with flavourings without alerting its taste which is why I recommend using it for your ginger ale.

You will also need fresh lemon or lime juice. I use lemon juice as I have all year lemon tree. However, using either of them will not impact the taste of your ginger ale.

You don’t need any special equipment to make ginger ale in your own kitchen. Equipment used is simple and includes a saucepan, bowl and a mesh strainer.

Once you have your ginger syrup ready you can make ginger ale by mixing ¼ of syrup and 2 teaspoons of lemon juice per with ¾ cup seltzer. This is my perfect mix but you can adjust the ingredients to suit your own taste.

You don’t need any special equipment to make ginger ale in your own kitchen. Equipment used is simple and includes  a saucepan, bowl and a mesh strainer.

Once you have your ginger syrup ready you can make ginger ale by mixing ¼ of syrup and 2 teaspoons of lemon juice per with ¾ cup seltzer. This is my perfect mix but you can adjust ingredients to suit you own taste.

Ginger ale is a non-alcoholic and refreshing drink made of fresh ginger and carbonated sweetened water.

Is ginger ale good for you?

Ginger Ale offers benefits such as faster weight loss and improved energy levels. It can refresh your senses after a tiring day and reduce weakness, lethargy, and body pains. Ginger Ale is specifically good for people who suffer from recurrent respiratory problems like common cold, allergic rhinitis, bronchitis, or sinusitis.

Does ginger ale have caffeine?

Traditionally prepared Ginger Ale does not contain caffeine. This is what makes it a superior refreshing beverage. It can act as a stimulant and increase your energy levels without creating the short-term and long-term side effects of caffeine consumption.

It is estimated that a 100-gram serving of Ginger Ale contains 34 calories. This is why it is also suitable for people who are conscious of their calorie intake and want to lose weight.

The calorie content, as well as the amount of carbohydrates in this beverage, is much lower than the commercially available soft drinks and carbonated beverage. This makes Ginger Ale a safer alternative to increase energy levels and feel refreshed even for patients with diabetes.

Ginger Ale is very easy to prepare and does not require you to put in much time and effort. This naturally refreshing drink may offer several health benefits. Its therapeutic effect on your digestion and respiratory system and stimulatory effect of your brain and immune system can help in the prevention of several diseases and help keep you healthy and active. Therefore, it’s definitely worth making ginger ale at home.

How Kombucha Can Help You with Weight Loss